A geological wonder that I encountered in Serbia got me thinking… 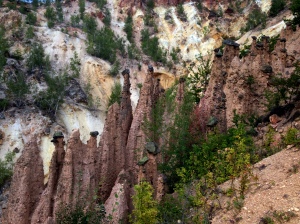 This photo shows a geological formation, famous throughout Serbia, that is known locally as “Djavolja Varoš” – the Devil’s Town. These fascinating towering rock formations emerge from the steep terrain due to the juxtaposition of hard and soft rock in the presence of the erosive effects of rain. Observe the hard caps at the tops of the pillars!

The site itself is widely regarded as a spiritual site and people often come to pay their respects at a purpose built chapel and to make wishes for the future.  Legend has it that this forest of stone pillars was formed by God who turned a wedding party into stone to prevent an incestuous marriage from taking place. The marriage itself was the handiwork of the Devil who had bewitched the local water and led the good townsfolk astray.

These emergent geological structures seem to people as if they are objects of interest in their own right to the point that we make up stories about them. The visitor centre hosts all kinds of artwork related to and inspired by the stones. They have captured our imaginations. As a result we have created a path to the stones that winds along the “Devils Gully”, which otherwise would be a boring dead-end that led nowhere! It is fair to say that the path itself is also an emergent phenomenon that has been caused by the juxtaposition of people and these interesting geological edifices.

On some level it is ironic that a path to a bunch of erosion induced objects is engineered to avoid eroding the objects further, but actually this is quite a profound observation. If the path failed to protect the rock formations from the erosive effects of people’s boots then the pillars of Devil’s Town would likely disappear.  This would remove the desire among people to visit the site in the first place, thus rendering the pathway itself pointless! The entire site would likely vanish as trees and foliage crept back.

I love the obvious, almost trivial, fact that the Universe allows emergent structures such as these rock formations, and the path leading to it, to exist. It occurred to me on observing the path and rock formations that emergent constructs could be very complex. In fact the entire planet, including all of its geology, biology and economics,  is an emergent structure and it is clear to me that both biology and economics are a direct consequence of this extremely powerful feature of the universe.

So what precisely do we mean by emergence?  The subtlety arises in the use of the word “juxtaposition”.  It is the juxtaposition of hard and soft rock that causes the formation of stone towers.  The formations are not the property of hard rock alone and they are not the property of soft rock alone. These geological features are the result of hard AND soft rock being stacked vertically in the presence of downward erosive processes. 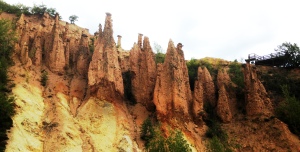 Now there’s a warning for us!

This thought process led me to ask a simple question:  “Can the emergent structure that is economics be designed in such a way that it preserves the biological formations that lead to economics in the first place?  If not, will the economic component vanish?”

One can also take inspiration from the pillars directly:  can we learn to control additive and subtractive processes such as the ones that produced the Devil’s Towers to make bespoke structures of our own design? Could we design our own local gullies such that houses, bridges, food and computers had no choice but to emerge naturally and easily? Furthermore could such a human economy intermingle with geology and biology in a way that mutually perpetuates all of them?